RSVP Etiquette vs. No Show Fees 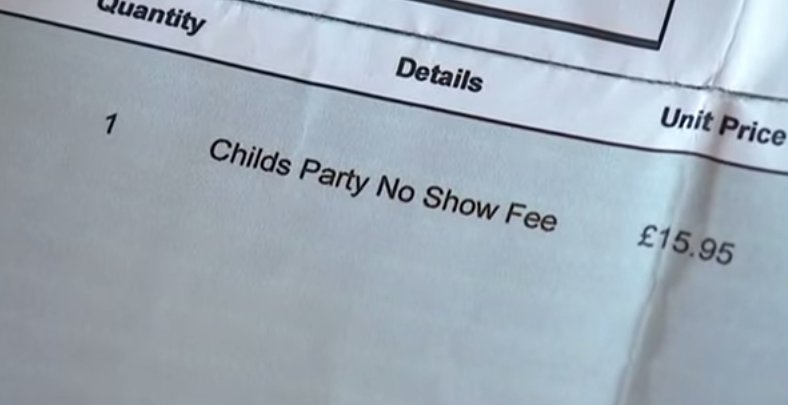 RSVP Etiquette vs. No Show Fees

I have seen this photo and article floating around Social Media the last couple of days.

According to the article , a child in the UK was invited to a birthday party, had given an RSVP to attend, and then didn’t show up to the party ( a ski slope) without letting the hosting parent know he would not be attending. We call that a “No Show”.

The article states that the parent of the child realized on the day of the party that the child’s schedule was double booked ( a visit with the grandparents ), but had no way to contact the parent to let them know about the change in RSVP. Then, the parent received an invoice for £15 ( approximately $27.50 CAD ) for the “no show” fee.

Why? Why cause such a fuss over such a small amount of money? And further – threatening to sue them?

Do these people have more dollars than sense? Certainly, there are fees to even file a lawsuit – but chasing someone over $27? That sounds like a colossal waste of time to me.

So, there are 2 issues involved here: Common Courtesy and Financial Loss .

What happened to common courtesy ? There is absolutely no excuse for the father to NOT change his RSVP to the party host. His claim that he did not have the contact information for the hosting parent holds no merit. He had the information to RSVP in the first place. If there is a change of plans, the contact information doesn’t “magically” disappear on the invitation. So – for this reason, the father was wrong – he should have changed his RSVP. A little decency goes a long way.  There is a way to be a “good guest”, just as there are ways to be a “good host”.

Then there is the financial loss . Everyone knows that having parties, has an actual cost associated with it; especially when the party is held at a professional venue (rather than at a private residence). The hosting parent invited the child, with an implied agreement to pay for the child to participate in the activity – meaning, the parent didn’t ask the guests to pay their own way. They are hosting their guests at the event and absorbing the costs. That’s how children’s birthday parties work in our society.

All events at professional venues require a confirmation of the number of attendants – and there is usually a “minimum” amount required in order to secure a booking. Try to book a hotel ballroom for a dinner party for 4 people. You can do it – but the costs will be astronomical.

The hosting parent was responsible to the ski slope to pay for the number of children that they guaranteed was going to attend – whether they showed up or not. So, when the child “no showed”, the hosting parent suffered a financial loss. Is it a huge loss? Not in my opinion. But, I guess she is trying to make a point.

I read this somewhere once:

It is more important to be kind,

than to be right.

I think that if both parents had been kind, they both would have been right.

What do you think?